This is more-or-less reinforcement of what you (should have) read earlier. The point of this guide is to help you learn what to look for when you start timing, as well as other things you’ll generally need to do. Oh yeah, this guide uses CAPS LOCK for EMPHASIS.

Step one is to GENERATE KEYFRAMES, OR ELSE SHIT WILL BE FUCKED. To load keyframes, go to Video -> Open Keyframes or drag the log file into the audio spectrum.

If you haven’t already setup your default timing settings, go do that. Press Alt+O and copy these settings: 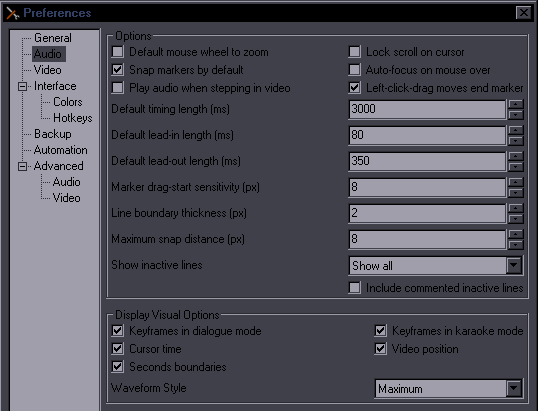 Personally, I time with spectrum view, if you’d prefer to use waveform, you can toggle it with the button on the far right:

Next thing you want to do is add lead-in and lead-out. By default, these are hotkey’d to ‘c’ and ‘v’. Pressing these will add in the lead-in/out you set earlier in the settings.

The next thing to do is decide if you need to do either of the following:

Keyframes are the purple ticks in the audio spectrum. You should know what they are by now, so I’m not going to delve into them. There aren’t any nearby keyframes, so we don’t need to worry about snapping for now.

HOW DO I MAKE LINES CONTINUOUS?

When lines are under 500ms apart, they should be made continuous, i.e. make it so that there is no gap between the lines.

Let’s look at the spectrum again:

As you can see, the next line is pretty close to the current one. We’re gonna need to make the line continuous with the next one. To do this, we will make the first line end where the next one begins.

NEVER INCREASE THE SECOND LINE’S LEAD-IN TO MAKE LINES CONTINUOUS. ONLY EXTEND THE FIRST ONE’S LEAD-OUT. A lot of people do this for some reason, even though I tell them a million times not to. 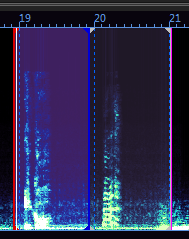 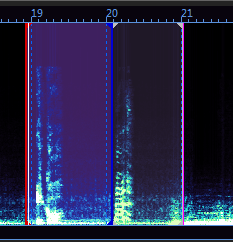 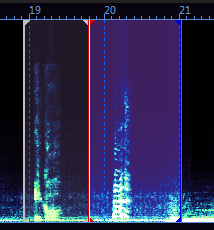 Just use regular lead-in for the second line then extend the end of the first to it.

After covering the gap, I suggest pressing ‘d’. This will play the last 100ms of the line. If you can hear the start next line, you added too much lead-out and will need to adjust it.

Now that we’re done timing the line, press ‘g’ to commit the change and move to the next line.

Sometimes, it may be hard to tell if your going to need to make lines continuous. When in doubt, time them separately.

Over time, you’ll be able to notice gaps like this just by liking at them. If you ever aren’t sure though, you can check the times in the subtitle grid box.

All I do is look at the ms. The first line ends at 840ms and the second one starts at 90ms. That means there is a 150ms gap between them. Since that is less than 150ms, the lines should be made continuous.

The only time you don’t make a line continuous is if there’s a keyframe between them.

HOW DO I SNAP TO KEYFRAMES?

Again, the purple ticks in the audio spectrum are keyframes. Keyframes denote when there is a scene change in the video. Generally, you want the subs to be “snapped” to these changes. In other words, you want the the subs to appear and/or end at the same time as a scene change. If your subs are still up after a scene change, you do something called a scene bleed. These are very, very bad. Make sure you don’t do them.

WHEN TO SNAP AT THE END OF A LINE 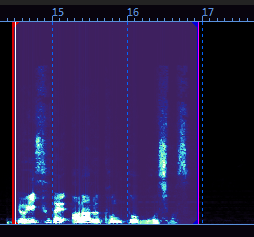 Normally, you’d add more lead-out to this line, but look, there’s a keyframe. Instead of adding lead-out, we will snap the end to the keyframe. Just drag the end of the line to the purple tick and it should auto-snap. You’re done.

If you are really close to a keyframe after regular lead-in, like this, go ahead and snap it. Generally, I snap if it’s 450ms or less away from a keyframe.

This is too far away and shouldn’t be snapped.

If the audio passes a keyframe, you’ll need to use your best judgment on whether or not you should snap. In this case, the audio is a trailing syllable, so you would snap it. If there are multiple syllables after the keyframe, you should probably not snap it. 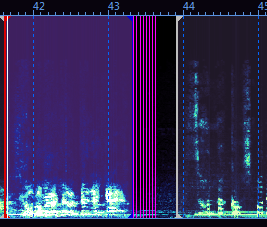 This usually happens during heavy action scenes where shit is flashing. You’re going to need to check with the video to see where the scene change ends and snap to that.

OKAY, WHAT ABOUT SNAPPING THE START OF A LINE TO KEYFRAME?
So let’s say you have something like this:

That is an example of a line with no lead-out near a keyframe. Generally, you should snap if it’s around 250ms or less away. One way you can check is by pressing ‘c’ three times after exact timing. Assuming you set your default lead-in to 80, that will add 240ms. If you pass or get really close the keyframe, snap. Otherwise, don’t.

It’s nowhere near close, so we won’t snap. Instead, we’ll just use regular lead-in.

IS THERE ANYTHING ELSE I NEED TO LOOK OUT FOR?
Keyframe generation isn’t perfect. Sometimes, “fake” keyframes appear. These usually occur when there is sudden motion.

At a glance, that looks right. But if we play the video (mouseover to play)…

As you can see, the second keyframe is where the actual scene change is. The first is when he starts moving. Obviously, it should be timed to the latter. Similarly, there are times where there are no keyframes during a scene change. This occurs when the scene change looks very similar to the previous scene. This is why you should always review your work.

There are two things you can do:

is the Aegisub tag that moves subs to the top of the screen. Put background dialog up here. If it’s over multiple lines, keep it consistent. For example, if it’s a teacher talking in the background, make all of his lines \an8 and all the main dialog on the bottom.

is making a copy of the current style, but with a different outline. If two lines overlap, the later line will appear on top of the second. If they start at the same time, the first line in the subtitle grid will be on the bottom and the second on top. The alt style should be on top of the main dialog. Should look something like this: 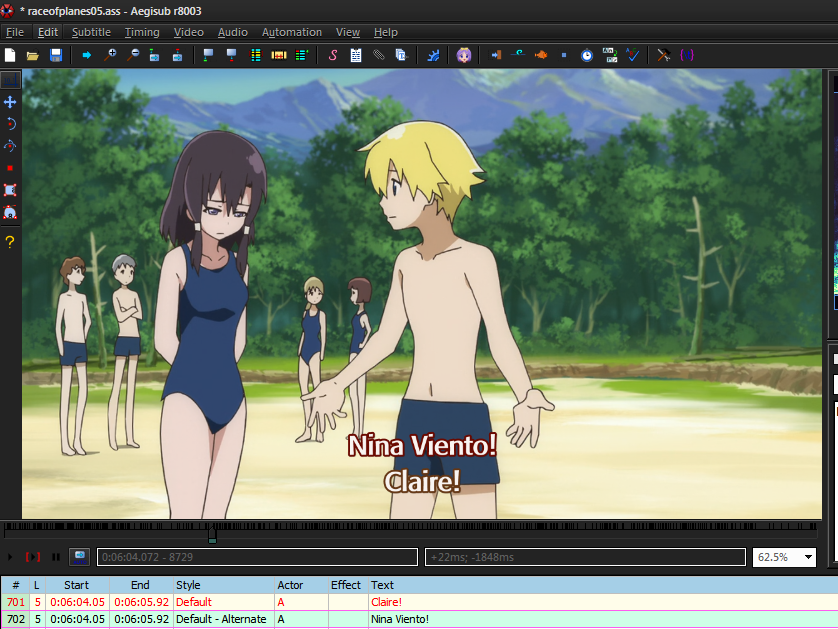 THERE ARE MOON RUNES ON THE SCREEN, HELP
Multiple ways you can handle this. You can…

The only problem with the last one is if you have a two-liner. Then you need to do double line break (\N) shenanigans.

Also, if you see a sign on screen that’s near the dialog, move the dialog. 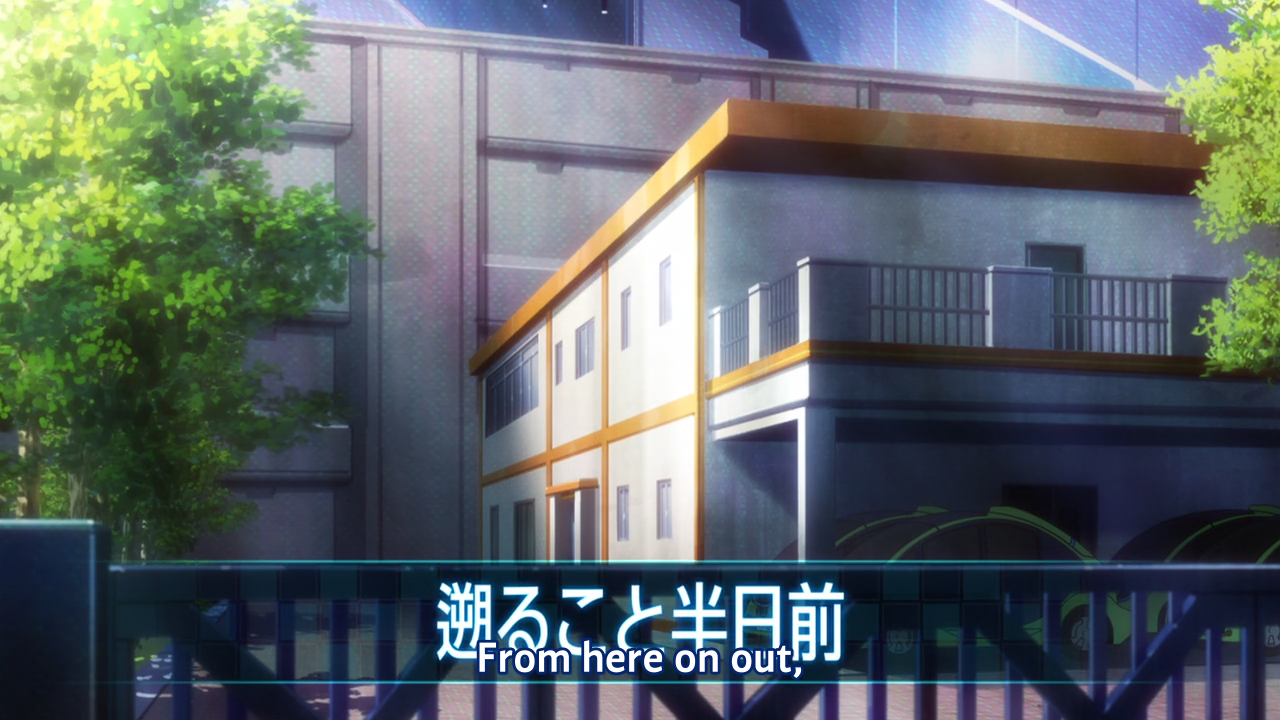 Yeah, don’t leave it down there. \an8 that shit.

ANY OTHER THINGS I SHOULD KNOW ABOUT?

One thought on “Timing with skiddiks”