Place these in \Aegisub\automation\autoload. I’d also suggest setting hotkeys for those scripts since you’ll be using them often.

Clean Up CrunchyRoll Styles/Import Your Own Styles

If you’re working with a CR script, chances are you’re going to see this shit. Yeah, it’s ridiculous. You really need five or so styles: Default/DefaultAlt/Signs/OP/ED. We want to delete all CR styles and replace them with our own.

For starters, you should familiarize yourself with the styles manager. To access the style manager, hit the pink ‘S’ in the menu.

The styles on the left are your stored styles. The styles on the right are the current script’s styles. You’re going to want to export the styles you’ll be using often for a show (typically Default/DefaultAlt/Signs/OP/ED). To export styles, hit the “New” button at the top and create a new storage. Next, select all of the styles you want to export and hit “Copy to storage”. They should now appear on the left side. You have successfully exported styles.

NOTE: The signs script is simply a placeholder script. If you don’t have one, you can make one by copying the Default styling. You should also set the border and shadow to 0. This will make your typesetter happy.

Next up is overwriting CR styles with the ones we just exported. Let’s open a CR script.

First thing I do is to sort all lines by style name. You can do so by hitting Subtitle->Sort All Lines -> Style Name. 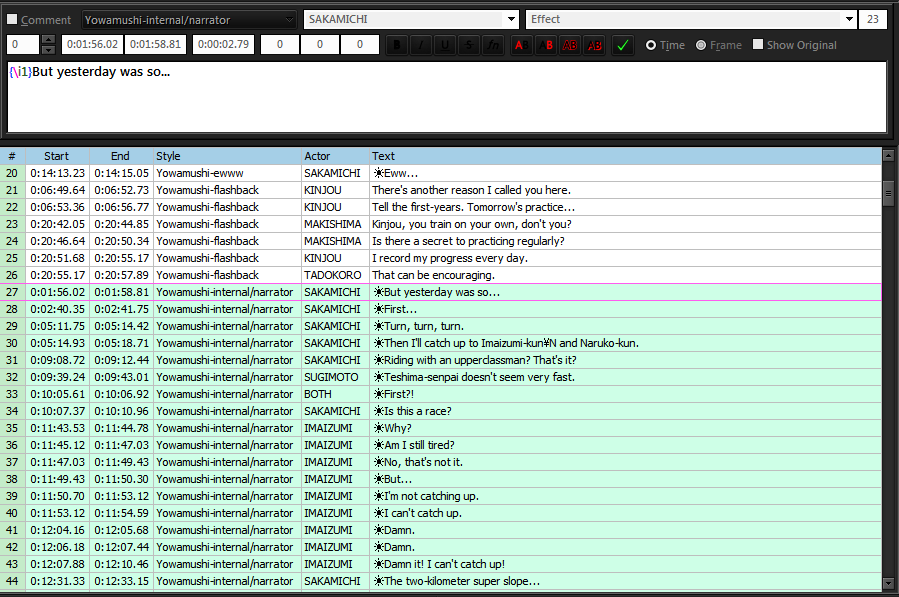 Next thing up is to delete all CR styles on the right. Yeah, all of them. After you do that, import all of the styles you exported earlier. Just click the catalog dropdown, navigate to your exported storage, then copy the styles to the script. They should appear on the right now.

Now, go down all the styles and change them appropriately. If the style was for a sign, give it the sign style. Dialogue gets Default. If the style is “Default – Italics”, “Internal/Narrator”, or something similar, you’re going to need to add italics (this is where the italics script comes in handy). Only internal monologue should be italicized. We generally do not italicize flashbacks/narrators. If there is a “Default – Top”, add {\an8} to the lines (again, the script helps). Now, it’s usually the editors job to do all this, but some editors are dumb/lazy/don’t even touch aegisub, so it’s a good skill to know.

Once you get that out of the way, sort all lines by style again. Select all the dialog lines, run the Script Cleanup script, and delete all linebreaks. If you are timing after editing, ask you editor before you do this. Some editors handle their own linebreaks. Otherwise, nuke them.

You should now have a clean script with minimal styles.

Just read unanimated’s shit. Use Shifting method 2 to shift songs. Basically, you’ll usually have a reference frame for songs (generally their first frame). Copy/paste the OP and reference frame. Find the reference frame in the video. Shift the ref frame to that.

Remember the Unimportant script I listed earlier? It does a fuck ton of random things. One of which is chapter generation. Now, it’s pretty self-explanatory, but I’ll explain it anyway.

Things to do when you finish timing